What CDL Drivers Need To Know About Sign-On Bonuses 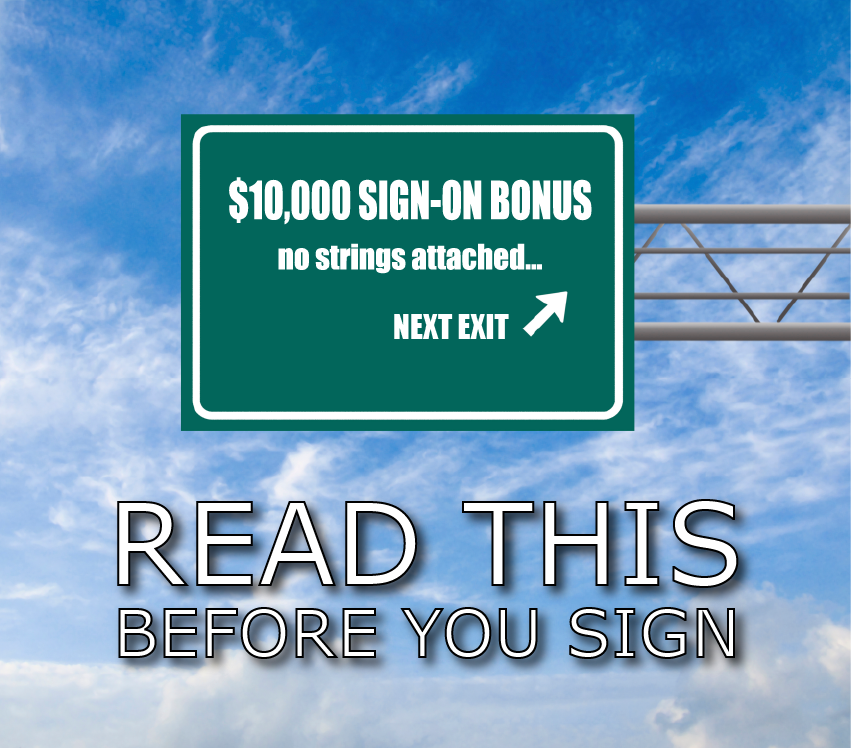 Back to all blogs

You’ve seen them on billboards, job ads, videos, and heard about them from recruiters; sign-on bonuses are seemingly everywhere. And they’re only getting bigger. What was $5,000 just 3-4 years ago is now $10,000 and all the way up to $30,000. Sounds awesome, right? You’re looking for a job and you’ve found one that pays well AND they’re going to give you a hefty check just for joining! As with anything in life, if it sounds too good to be true, it likely is. Our mission has always been to be fair and upfront with drivers, so we’d like to dive in to some of the downsides of sign-on bonuses.

To start, we need to get something out of the way. We know that not all companies structure sign-on bonuses to be predatory. Heck, we offer a sign-on bonus for our team routes in Reno, NV that have no stipulations other than a weekly payout instead of one lump sum. There are fair and reasonable bonuses out there but they’re not the norm by any means.

There are many facets to sign-on bonuses and they vary by company, location, and even position. Some sign-on bonuses lock you into a multi-year contract, some force you into joining a union, and some are intentionally designed to require you to perform job duties that you didn’t even sign up for. There’s a lot to look at when it comes to signing bonuses, so we want to dive into some of the big factors to help drivers understand the pros and cons.

When will you be paid?

The payout structure of sign-on bonuses can tell you a lot about whether they’re predatory or not. Most of the bonuses that you’ll want to stay away from are paid out upfront, right when you fill out your new hire paperwork. It sounds great to get a big chunk of money all at once, especially if you’ve been out of work and need a little extra cash to get caught up on things. The problem with this payout structure is that the company needs some reassurance that their investment will pay off. This will come in the form of a multi-year contract. If you leave at any time before the contract expiration (usually two years), you’ll be required to pay the full sign-on bonus back pre-tax. This means that you’ll actually be paying back more money than you received, since the bonus was taxed. Many times, drivers see a $6,500 bonus after tax, but if they leave they’ll be paying back $10,000.

The non-predatory sign-on bonuses are those that pay out weekly or even monthly. As previously stated, companies need a little reassurance that this investment in a bonus won’t be a net negative. If you pay out the bonus upfront with no contract, anyone and everyone can get onboarded, collect the bonus, and leave the next day. The benefit of sign-on bonuses that are paid out periodically is that you (typically) don’t have to pay the bonus back if you leave, since the company hasn’t paid out the full amount yet. To use our rare sign-on bonus as an example, we pay the $5,000 out every week, so if a driver leaves at any point, we don’t expect them to repay us a single dollar.

You’re locked in, but your duties may not be.

So, you’re locked in to a two-year contract, but you’re a truck driver; you’re going to drive a truck regardless, so you got a big load of cash upfront for a job you were going to do anyway, right?

Predatory sign-on bonuses not only lock in your commitment for several years, they lock in your pay rate as well. So if the market shifts and all carriers are bumping up their pay rates, you may still be stuck at a rate that’s no longer competitive. In the past 12 months, driver pay has increased dramatically and you may be stuck at a much lower rate for up to 2 years. Additionally, with certain carriers, accepting the sign-on bonus automatically signs you up for a union. This means that on top of being locked into a rate for 2 years, you’re also paying monthly union dues that change (typically increase) once or twice a year.

Lastly, some contracts don’t even have promises in terms of the miles you’ll run or even that you’ll be driving a truck. Some LTL carriers will ask drivers to work the docks for days at a time if they get bumped off of a run.

At the end of the day…

It’s always up to you. If a company has a vice-grip signing bonus but they offer great pay, benefits, and the home time you’re looking for, then being locked into a contract may be worthwhile. And as we said previously, there are plenty of companies out there that offer bonuses that we wouldn’t call ‘predatory’, but we can’t stress enough how important it is to read the fine print over and over again. Our recruiting department hears far too often from drivers that want to come on board but are stuck in a contract because they didn’t know what to watch out for. Our hope with this blog post isn’t to cry foul on sign-on bonuses, but rather to educate new drivers on the pros and cons so they can make the best decision for themselves. As always, stay safe out there, drivers!

CVSA International Roadcheck 2022: What To Watch For

If you ask any truck driver when their favorite week of the year is, exactly 0 of them will say the Roadcheck Blitz...

END_OF_DOCUMENT_TOKEN_TO_BE_REPLACED

Driver-Facing Cameras: Are They Here To Stay?

Driver-facing cameras are a hot button issue in the trucking industry today. As their adoption has risen, so too has...

END_OF_DOCUMENT_TOKEN_TO_BE_REPLACED

Staying Happy Out On The Road

Redbone Trucking doesn't exist without our drivers. Therefore, making sure our drivers are happy is a massive priority...